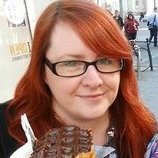 By Nollaig, April 26, 2012 in Author Interviews and Forum Visits